Sawmills across North America looked toward the end of summer after mid-May, as lumber prices continued to rise but sales volumes were unsteady.

Lumber producers in the US and Canada considered this current market strength as temporary, and were already making plans for seasonal slow-downs when summer draws to a close.

Prices were nudged up every day as sawmills sold out of stock with ease, and at higher levels. Customers throughout the market were very underbought, and field inventories remained low even as many buyers abandoned their caution and tried to secure volume. Sawmill order files were into the weeks of June 15th and 22nd. Bread-and-butter sizes continued to garner consistently strong demand, while sales of 2x8 and 2x10 were also really hot. As construction in Texas was roaring, 2x4 R/L #3/Utility sold particularly well. 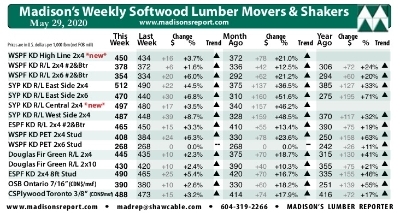 Looking at structural framing softwood lumber, Western-Spruce-Pine-Fir studs continued to be massively undersupplied as pandemic restrictions were lifted and building activity in North America came to life. According to producers in British Columbia, the price of 2x4-8’ studs jumped up $22 to US$392 mfbm. Supply was gone in a flash.

The below table is a comparison of recent highs, in June 2018, and current May 2020 benchmark dimension softwood lumber 2x4 prices compared to historical highs of 2004/05 and compared to recent lows of September 2015:

Mike Mallin  ( Midwest Hardwood Corporation)
Hardwood Lumber is experiencing a flat or declining price market. The low grade and industrial products are at some of the lowest prices of the past decade, as our many of the high grade items. Demand has been impacted by flat demand from China and the Covid crisis world-wide. Overall Hardwood production is at a low point in a decade as well, so supply continues to adjust downward. Any material improvement in demand will be met with tight supply and potentially rapid spikes upward in pricing. Hardwood continues to be a great value.
05-06-2020 12:00:00  发布回复